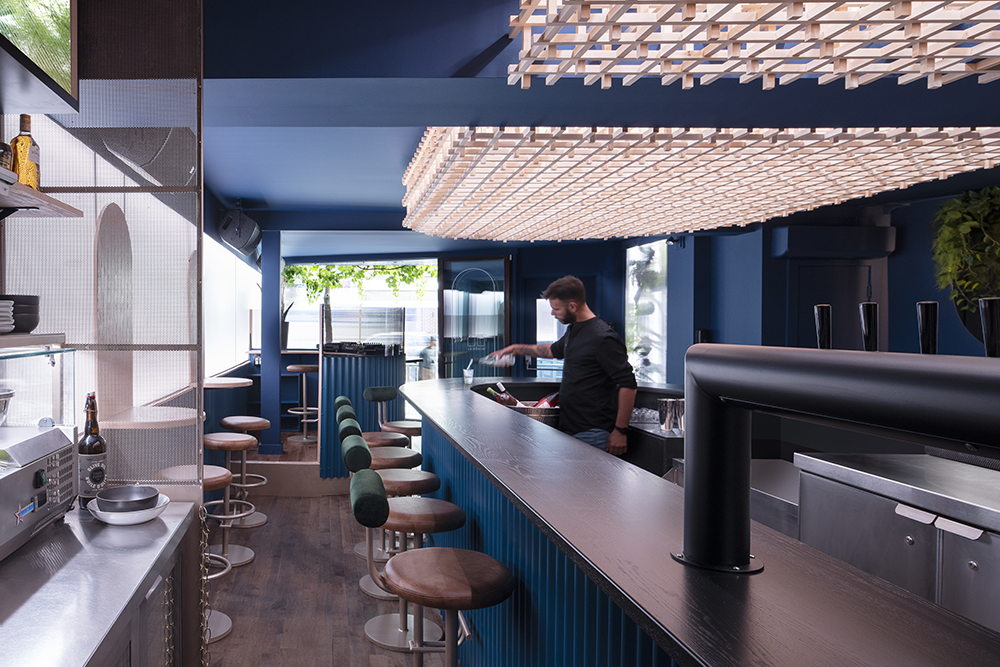 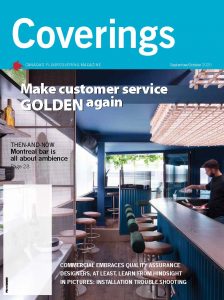 Using one art form to describe another is a curious business. Design inspiration can come from anywhere, and Montreal, Que.-based architect Patrick Blanchette, turned to playing an electronic dance music track repeatedly to zero in on ideas for the interiors of the new Minéral bar/nightclub in Montreal.

The starting point was simple for his firm Blanchette Architectes: a musical idea for each of the three distinct ambiances that succeed each other as the night goes on. Based on that idea, the design team imagined a space whose atmosphere could change radically from its late-afternoon opening to its late-night peak.

“As they emanate from the architecture, light and colours become raw materials that fill the space,” says Patrick Blanchette, the firm’s founder. Working in close collaboration with the client, the architect imagined an evolving scenic design where “sound vibrations translate to waves of colour, staying with the guest from their first after-work cocktail until late at night.”

Architecture, light and the soundscape were all handled as raw materials to frame the bar’s atmosphere at different times of day. The “warmly glacial” space plays on the warm-cool duality of colours, materials and light. Soothing light is projected onto wall-mounted canvases, reminiscent of art installations like those of American artist James Turrell.

Blanchette notes “before we reimagined it, the space was particularly dark and poorly lit. We had to work with luminous walls and facing mirrors to let the space breathe. The idea was to take control of the lighting.”

Bar Minéral is the latest bar project from entrepreneurs and restaurateurs Mathieu Ménard and Steve Grenier. Since Ménard is not only an entrepreneur, but a talented cabinetmaker, the space is organized around impressive woodwork: the bar countertop in black-lacquered Quebec oak and the imposing, Japanese-inspired wooden ceiling structure that provides a nod to wine cellars. The elements are infused with light, showcasing the woodwork, while the bathrooms are tiled in 4 x 4 in. black ceramic tile. Besides wood and tile, other simple materials such as metal, leather and polycarbonate were used as the backdrop for the dramatic lighting.

The project is the first time Blanchette had collaborated with Ménard and Grenier. “Matthew and Steve are friends of mine,” says Blanchette. When he started his own practice two years ago, he discovered Ménard was one of the bar owners close to Blanchette’s office.

“Sometimes after work I would have a drink with him there and talk about the realities of his next new project.

“He said about a year ago that when he opens his next bar ‘you will be the designer of that space.’”

At the beginning of the project disco balls in the space were a top priority for the client “to make sure that everyone has fun.” Later, Ménard told Blanchette, “the only constraint you have concerning the bar design is that I want to hear that song (Mazlum by Ali Kuru) at 11 o’clock each night and feel the space that is in that track. “He wanted a bar that had a connection with that kind of ambience.”

Blanchette remembers enjoying a glass of wine at his place one night playing the track as many as 20 times. “I imagined myself on a warm, rainy Tokyo street, with the colour of blue light everywhere.” This became the scene description that he took to his design team.

The project was complex due to the changing ambience required by the client — two entirely different experiences for customers, Blanchette explains. “One is for after work, with natural warm, white lighting, similar to sunlight. By night it becomes really colourful and more like the experience of a nightclub in the wine bar.”

Ménard calls his bar “a place for experiences, where light transforms the space and becomes a material. Minéral appeals to all the senses: we are bathed in light that shifts with the changing sound environment, while we sip organic and natural wines, enjoy cocktails and savour Mediterranean-style shared dishes.”

According to Blanchette, all of the comments from his two clients “are really, really good — the sales are amazing.” In a walk around the neighbourhood, he noticed several people talking about the Minéral Bar. “It has become one of the coolest places in the Gay Village area.”

Blanchette points out that the establishment is not a gay bar only for men, but for everyone. “That is a big difference — 30 percent of the customers are female.

The Service of Seeking and Deciding: Design?